Published on 9 januar 2023 by Valgeir Gudbjartsson 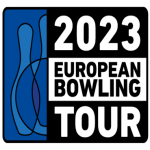 After 3 steps of the final then it came down to top 3 playing stepladder to win, and results as follows: